The story began on October 20th, when an editor (Kang Kook Hwa) made a post on Instagram detailing a bad experience with a certain female celebrity. 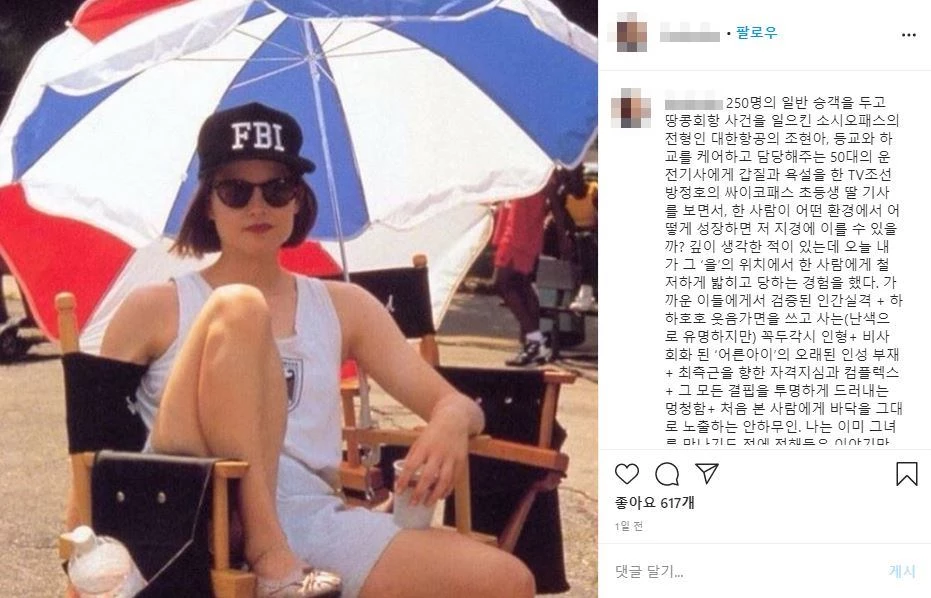 “Looking at articles about Heather Cho, who is the epitome of a ‘sociopath’ when she created the infamous peanut incident in which she made an airplane with 250 passengers return to the airport over some peanuts, also the article about the psychopathic elementary school daughter of Bang Jung Ho, the former president of TV Chosun, who abused her power and cursed at her 50-year-old chauffeur. I came to wonder how an individual is raised to become like that. I’ve been deeply thinking about it, but today, I’ve been thoroughly trampled by this one person, and I became the position of the abused. Proven to be disqualified from being human + a puppet living behind a smiling mask + known to be a warm person by friends + an ‘adult child’ who lacks character + has a sense of entitlement + has the stupidity that reveals all the deficiencies transparently to the person they meet for the first time.

I should have prepared myself from the stories I’ve heard before I met her. But today, I became speechless as this person stung me with her words that are like electric needles. I had no choice but to stand still with my hands, feet, and even my brain tied together. I had to stand still in front of that repulsive face that was hysterically throwing a fit at me. I had to stand there like a fool without anything I could do.  This person did not give me time to understand the situation or even seek understanding from this person. This person didn’t even give me a chance to explain because she can’t hear anything. I’ve experienced all sorts of people in this field for 15 years. I thought I had experienced everything in life and thought I had let everything go, but I was wrong.

I experienced hell for 20 minutes in an unfamiliar room. This person skipped the greeting and sat right down as this person began spewing insults at my face with her cellphone pointed at me. This person was so emotional that you couldn’t know if she’s talking to everyone in the room or just me. But either way, the target today was me. I wondered, ‘I guess other people experienced this too? They are experiencing it, right?’ The knife from her mouth did not stop as I have been stabbed multiple times by her words, and only tears rolled down my face. I wasn’t even in the right mind to feel embarrassed that I was crying; tears just came out. What am I doing this for? Who am I doing this for? What do I want to show? Is it to earn money? Who chose me? Did someone ask for a favor? Why am I going through such an insult?!

I thought deeply about this but could not understand her actions. I calmed down, and I wanted to talk to her person to person like a normal human being. And I wanted an apology. But she just disappeared. I recorded everything, just in case something else would happen. I should take action against this lady. I will state the exact facts through my words.

I was an editor paid to work and was a writer. I’m going to use all my energy and use my brain smartly and cleverly from now on. It’s been a long time since I felt revenge be a catalyst #psycho #monster.”

Many netizens speculated that the rude idol was either Irene or Seulgi due to the hashtags  #Pschyo & #Monster used in the post.

It has now come out that the person the editor is talking about was, in fact, Red Velvet’s Irene. SM confirmed this with an official statement followed by an apology by Irene.

Irene sincerely apologized for the deep hurt she caused to the stylist because of her carelessness and emotional behavior when she met with her this afternoon, and she’s sorry for causing concern to many people with her immature behavior.

We also feel responsible for this, and we’ll not forget the hard work of all the people and staff who collaborate with us and our artists, and we’ll try to prevent this from happening again to everyone who works with us.

Once again, we apologize for causing concern.”

“This is Irene.
I sincerely apologize for hurting the stylist with my foolish attitude and careless words and actions. I received a lot of help from people who gave their effort for me to get to where I am now, and I regret that I hurt them greatly with my immature behavior.
This incident has made me look back on the past, and I’m very ashamed of my poor words and actions, and I feel the importance of staff members once again.
I’ll think and act more carefully, so this does not happen again.
I’m truly sorry to the fans who support me and for causing worry because of this incident.”

In my honest opinion, as a ReVeluv myself,  I’m not too shocked; however, I am disappointed in Irene that she would do something like this. It all reminds me of what’s going down with ELLEN and her staff. I want everyone to keep in mind that this is not the first idol to act this way. Some of your faves likely have personalities like this as well.